The parents of Samya Rose Stumo presented testimony in May that became a part of the official record in a hearing that included Federal Aviation Administration Acting Administrator Daniel K. Elwell and National Transportation Safety Board Chair Hon. Robert L. Sumwalt. (A copy of their testimony appears below.)

The U.S. House Committee on Transportation and Infrastructure’s Aviation Subcommittee questioned these governmental executives on May 15, 2019, for two hours on the status of the Boeing 737 Max.

Stumo’s parents, Nadia Milleron and Michael Stumo, who attended the hearing, also met with congressional leaders on Capitol Hill. A photo capturing one of these encounters with Elwell was listed as one of BuzzFeed’s “most powerful photos” of the week. It included signs the couple had made and photos they had gathered of victims of the March 10 crash of a Boeing 737 Max8 in Ethiopia. They were accompanied to the hearing by one of their attorneys, Robert A. Clifford, founder and senior partner of Clifford Law Offices (seated far right). 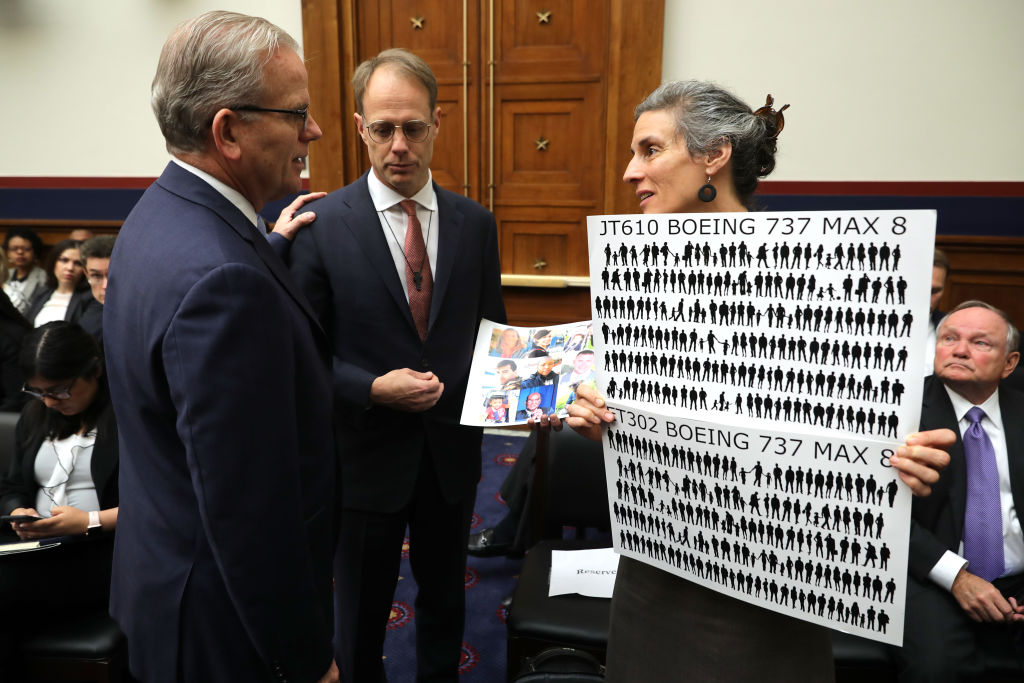 WASHINGTON, DC – MAY 15: Federal Aviation Administration acting Administrator Daniel Elwell (L) talks with Michael Stumo (C) and Nadia Milleron (R), the parents of Ethiopian Air crash victim Samya Stumo, before a hearing of the House Transportation and Infrastructure Committee’s Aviation Subcommittee about the Boeing 737 MAX airplane in the Rayburn House Office Building on Capitol Hill May 15, 2019 in Washington, DC. The Department of Transportation is investigating the process that certified the airplane, which has been grounded since it was involved in two fatal crashes, killing 346 passengers and crew in October 2018 and March 2019. (Photo by Chip Somodevilla/Getty Images)

STATEMENT OF NADIA MILLERON AND MICHAEL STUMO BEFORE THE U.S. HOUSE COMMITTEE ON TRANSPORTATION AND INFRASTRUCTURE
May 15, 2019

Our names are Nadia Milleron and Michael Stumo. We are the parents of Samya Stumo who lost her life on March 10, 2019, in the crash of Ethiopian Airlines Flight 302 aboard a Boeing 737 Max8 airliner. Words cannot capture the grief we still feel and that will fill our lives forever.

We make this statement today to try to express to this important congressional Committee about the impact that a plane crash has on the lives of so many. It was not just our family that needlessly suffered the loss of our beloved 24-year-old daughter who had so much to give the world. There were 157 people on that plane that crashed into a field, making it their burial ground. Although we immediately rushed to Ethiopia to recover what we thought would be her body, we began to realize that there were no bodies. In fact, the remains, what little might have been left of Samya and of everyone else on that plane, were such small body fragments that they could not be recovered. We were forced to leave Ethiopia without her body.

We wake up every morning thinking of our Samya, and we go to bed each night hoping that she did not suffer too much in the last moments of her life. It was a wonderful life she had and one where only dreams lay ahead. She was traveling to make life better for others, helping to set up ThinkWell offices in countries that could benefit from better health care delivery. She was such a giving person. We are so proud of all that she accomplished and the mark that she left on so many in her short life. As we talk to other families who lost loved ones, these stories of love, of pride, of accomplishment, of loss are repeated over and over again.

But now we turn to you, as congressional leaders, to make sure that other families do not suffer from preventable airplane crashes in the future. Families of the victims have not been included in the process, we need to be included at all levels from here on out.

The Boeing 737 Max8 airplane needs to remain grounded until all independent investigations are complete. Investigations are ongoing by this Committee, the Joint Authorities Technical Review, the Department of Transportation Inspector General, The DOT Blue Ribbon Panel, the FBI and the FAA Technical Advisory Board. The purpose of these investigations is to discover everything necessary to identify and correct problems.

A stunning array of news stories are consistently revealing more potential problems with design, safety procedures, software, hardware, manufacturing and certification. Flyers and governments across the world, including our family, have had our trust in Boeing and in the Federal Aviation Administration shaken. The Boeing culture of engineering safety may have been destroyed in favor of a Boeing management culture of profit extraction.

A third crash would kill more people and destroy the credibility of Boeing and the FAA.

The Federal Aviation Administration has a clear path forward to re-establish credibility and protect flyer safety. It can wait until all investigations are complete to determine all problems including the relationship among hardware, software, manufacturing, design, certification and pilot operation. Doing so would convince us, victims’ families and the world that the FAA and Boeing are serious in putting flyers first.