Jack J. Casciato Went From Defense Attorney to Protector of the People 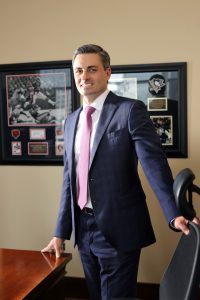 Jack Casciato’s backstory is unique in the Clifford Law Offices family, and something he uses each day to further his mission of helping those that most need legal protection.

For the first eight years of his career, Jack worked as a defense lawyer at a nationally known firm, representing medical practitioners, construction companies, product manufactures, major trucking companies, and other large corporations. In essence, he represented the other side of personal injury cases.

Things changed in 2018 after he tried a significant truck accident case against none other than Clifford Law Offices, standing across the courtroom from Robert (Bob) A. Clifford himself. Not long after that case, Bob reached out to say his firm had a vacancy and wanted to recruit Jack to its side.

Jack had always wanted to be a plaintiff’s attorney. He remembers watching films like “Erin Brockovich” in law school and reading books like Jonathan Harr’s “A Civil Action” and being inspired to help people. “I always knew I wanted to represent injured people,” he says. Moving from the defense side of the law to personal injury, he adds, was always in the back of his mind. With the call from Bob Clifford, the chance to do that seemingly appeared out of nowhere.

However, Jack did not completely shrug off his experience as a defense attorney just because he switched to the other side. In fact, he cites those first eight years as some of his greatest assets when it comes to personal injury cases. That time spent on the other side makes him especially well-versed in Illinois laws and various defense theories, allowing him to predict the next move the defense may make on any given case. 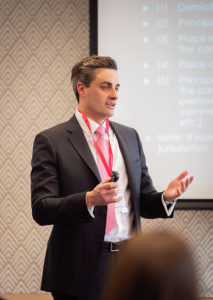 A recent case he likes to talk about is one he and Bob Clifford settled in October 2020 on behalf of eight acrobats with the Ringling Bros circus. The case involved a performance where the overhead rigging was not executed properly. The ensuing accident injured the eight acrobats for life and ended their careers. Had a jury ruled in favor of the defense, these individuals would not have been able to take care of themselves from a medical standpoint. Fortunately, the court ruled in favor of the acrobats, and the five-year-long case was settled for $52.5 million.

Jack sees the successful result of the case as a great example of “how the justice system can bring justice” to those who most need it. Victims of negligence in personal injury cases rarely have any legal background or expertise themselves. “They turn to us, knowing we’ll be their protector through the system,” he says. Left on their own, these victims would not realistically stand a chance against the major corporations and conglomerates usually on the other side.

In that sense, Jack sees his role as guiding individuals through the legal process and protecting them from the many nuances and complexities of the law. A successful result isn’t a victory because of the money. Rather, a positive result means justice has truly been served and the victims can glean some emotional closure from their traumatic circumstances.

Jack’s philosophy of helping others extends outside of his work with Clifford Law Offices, too. He sits on the Investor Board for Ann and Robert H Lurie Children’s Hospital in Chicago. He also throws an annual charity dinner for lawyers under 40 that raise money for Life Span, an organization helping victims of domestic violence and abusive relationships. Just as it is with his work at Clifford Law Offices, his mission is simple: to help, protect, and guide those who most need it.