Approach the Bench: Susan A. Capra 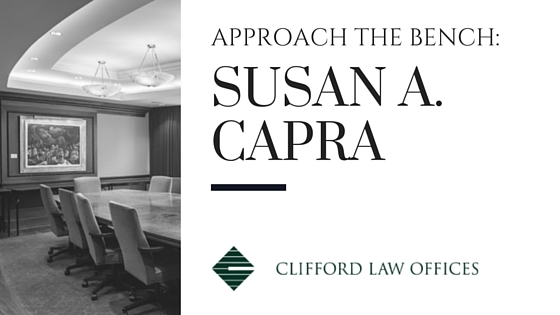 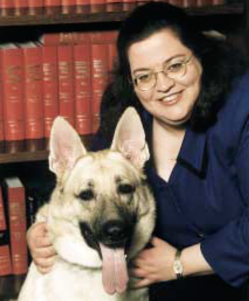 There’s a reason why Mack is so protective of Susan Capra.

Because he loves her so much. Mack is Susan’s four-year-old German Shepherd. And can you blame him? Susan is, perhaps, the most beloved attorney in the office.

Susan graduated from Robert Clifford’s alma maters-DePaul University and DePaul College of Law. She studied nursing as an undergraduate and worked for many years in between degrees at Children’s Memorial Hospital in Chicago. She was plucked from the ranks of third-year law students as one of the most promising attorneys in her class.

When asked if it’s difficult to go up against doctors, nurses, hospitals and health insurance companies in court, her response is quick: “People make mistakes, even doctors. If someone has been injured by someone else’s negligence, it’s only fair and the right thing to try to help the injured victim recover for someone else’s wrongdoing, be it a doctor, a nurse or hospital staff member,” Susan says. “It’s not a vendetta, it’s not seeking revenge. I have learned from Bob Clifford that doctors and hospitals are to be treated with respect, but yet held accountable for their actions.”

And she has developed quite a reputation in medical malpractice circles for her tireless behind-the-scenes work in developing sound negligence cases. Putting in 18-hour days is not uncommon, using her medical background to get into the necessary details of what occurred during a patient’s treatment.

In fact, at last year’s office Christmas party, Susan was the only attorney unable to attend, attending a deposition in Quincy, Illinois, too far to return in time for the holiday festivities. It was that type of dedication to one’s clients that Bob Clifford cited in naming her a partner at the firm.

“Susan Capra consistently demonstrates unwavering loyalty to her clients, colleagues and friends,” Mr. Clifford said. “It’s a privilege to have her as my partner and all of our lives are enriched by her.”

Susan approaches her whole life with such discipline and enthusiasm-whether it be her commitment to her alma mater (“I’m a season ticket holder for the DePaul Blue Demons and a die hard fan”), to her family (“My parents were very involved and supportive”), her two nieces, Lauren and Courtney (“They’re my pride and joy; I’m the doting aunt who spoils them”) or her dog, Mack.

But it’s clear that Susan’s job largely defines her life. Through her experience, she’s able to keep things in perspective when dealing with such tragic crises in people’s lives. “It’s very sad,” Susan says, turning serious. “The most horrible and unimaginable tragedies have happened to our clients. It helps you realize how precious life is and to focus on the important things in life.” So committed is Susan to her profession, she proudly states, “It is an honor to be at Clifford Law Offices and I do not ever want to do any other type of law.” But she does see herself one day retiring to indulge in her love for travel, gardening, the opera, ballet and theater, and, of course, dogs.

She recalls her childhood days on Chicago’s Northwest side when she would bring home every lost or injured animal-from birds and squirrels, to cats and dogs. “Everytime I came home with another animal, I promised my parents I would never do it again, until the next time, that is. We would keep them long enough until they got better or we could find homes for them.”

And, apparently, her love of taking care of animals in need continues. Just last month she found a stray shepherd-collie mix and took him home. Unable to keep him herself because of Mack, she took him to an animal hospital and was prepared to board the dog until a new owner would come along. But, as luck would have it, a family was sadly bringing in their old dog who had to be put to sleep. They fell in love with Susan’s stray and took him home the next day.

That’s Susan. Always helping. Always putting others first. It makes you want to embrace her the moment you get to know her. It’s lucky Mack is around to protect her for all of us.