Bob Clifford on WGN-TV to Discuss Mock “Trial of Hippocrates” 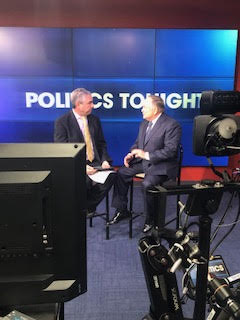 Robert A. Clifford was discussing his participation in representing the Father of Medicine in the recent mock trial, “Trial of Hippocrates,” on Channel 9, WGN-TV news, with the station’s political analyst Paul Lisnek, on March 7th at 5:30 p.m.

Clifford, along with Winston & Strawn’s Dan Webb, represented Hippocrates in the style of ancient Athens with a modern twist where the Greek physician is accused of violating his oath in caring for the dying King of Thebes.

Rounding out the attorneys’ teams were Chicago attorneys Christina Faklis Adair and Tinos Diamantatos. Some of the trials have been televised on Chicago’s public television station, WTTW.

The presiding judge of the event was the Hon. Charles P. Korcoras of the Northern District of Illinois, along with the Hon. William J. Bauer of the U.S. Court for the Seventh Circuit and Cook County Circuit Court Judges Anna H. Demacopolous and Sharon Johnson Coleman.

The trial was on Wednesday, Feb. 20, at the Harris Theater, 205 E. Randolph St., Chicago. A mock jury was judging the legal battle along with attendees who rendered a verdict at its conclusion and a “winner” was announced. Clifford and Webb were successful in their representation of Hippocrates.