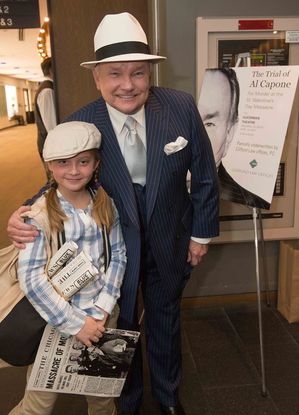 Bob Clifford participated in the American Bar Association (ABA) mock trial The Trial of Al Capone for Murder at the St. Valentine’s Day Massacre on April 13th, 2016 at the Goodman Theatre. Bob played the role of Al Capone.

In the mock trial, Capone stood trial for the 1929 St. Valentine’s Day Massacre that allegedly included gang members of the rival North Side. The jury verdict and audience vote was not guilty.

The event included respected judges and lawyers and testimony from popular characters, such as Eliot Ness and the original Scarface himself.

This event was sponsored by the ABA’s Litigation Section – the largest specialty section of the American Bar Association.

Congrats to Bob for such a memorable trial.