In response to Federal Aviation Administration officials’ statements before Congress yesterday, Nadia Milleron, the mother of Samya Stumo, one of the Boeing 737 Max victims, is protesting in front of the FAA offices at 800 Independence Av. SW, Washington, D.C. at noon on August 1st, 2019. 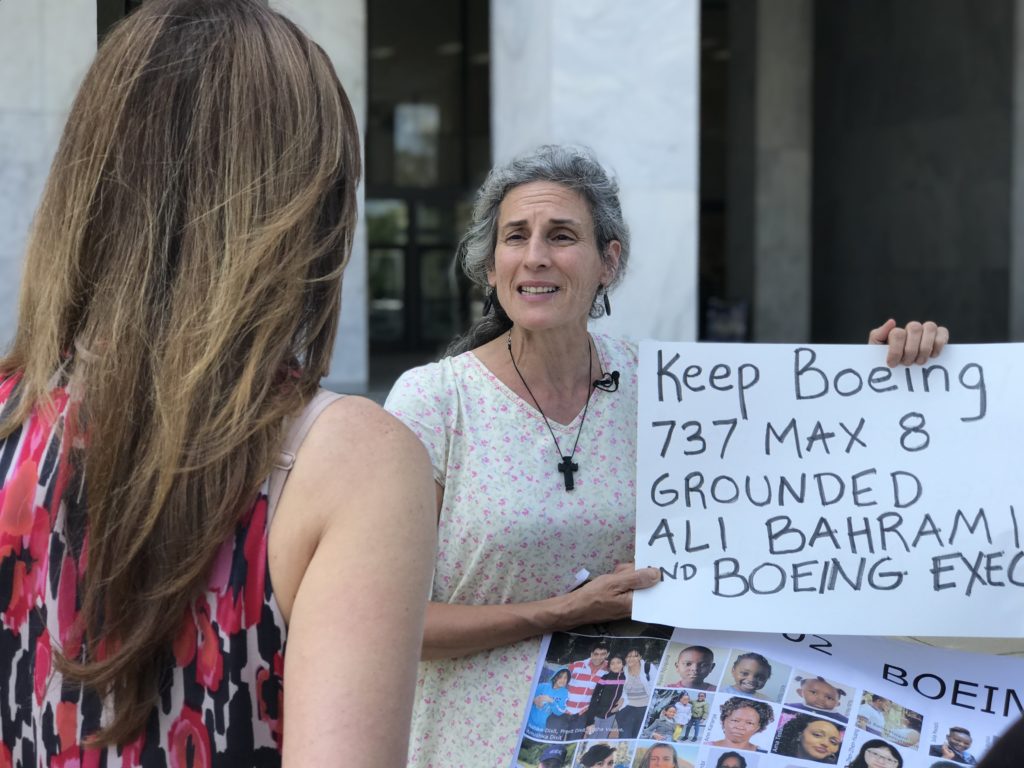 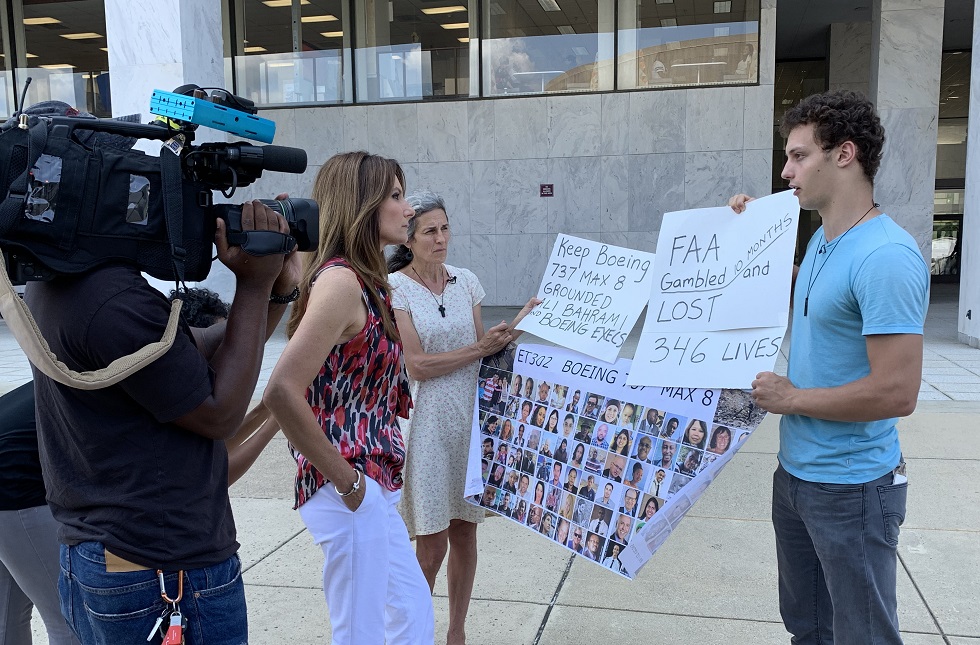 Associate Administrator of Aviation Safety, Ali Bahrami, testified yesterday that following the airplane’s 2018 crash in the Java Sea, the FAA’s analysis of Boeing’s 737 MAX’s MCAS software revealed an unacceptably high risk that required immediate action. The FAA’s pilot directive was the most important thing to implement until a final fix was put into place. The FAA failed to target software and equipment changes, training or inspections as is necessary when a high-risk analysis is reached.

The agency did not ground the Boeing 737 MAX planes until after another crash in March of this year. That crash killed Samya Stumo and also implicated the MCAS.

Nadia Milleron, accompanied by her son, Tor Stumo, drove overnight to the nation’s capital to personally deliver their message. They carried signs saying “KEEP BOEING 737 MAX 8 GROUNDED ALI BAHRAMI AND BOEING EXECS GO TO JAIL” and “BAHRAMI’S “INTERIM” iPad TRAINING WHEN FAA PILOTS ‘COULD NOT RECOVER SUCCESSFULLY’ KILLED MY DAUGHTER AND 156 MORE.” According to Milleron, “The FAA and Boeing took a 10-month gamble with our lives and lost 346 people. The investigatory bodies looking into the crashes should seriously consider criminal liability.”

Michael Stumo, Samya’s father, has this to say about the statements made by FAA’s Acting Deputy Administrator:

“This statement by Acting Deputy FAA Administrator Carl Burleson, is untrue. The FAA told Congress, ‘The fundamental process of how we went about certifying the MAX was sound.’ The FAA cannot regain credibility with denials and refusals to change.

“The FAA should fully disclose the errors it made that contributed to the death of our daughter, Samya Rose Stumo. It should relieve any individuals making those decisions and errors from their positions.

“The FAA should reveal how it approved the 737 MAX 8 when it knew the angle of attack sensors were prone to fail and had no backup in apparent violation of FAA’s own standards. It should tell Congress and the public how it could avoid grounding the 737 MAX 8 after the Lion Air crash when its employees concluded it ‘didn’t take that much’ for another software failure to take control of the plane and push the nose down for a crash.

“The FAA should pledge to fully recertify the Boeing 737 MAX 8 as a new aircraft, require simulator training for pilots; place new management in positions that regulate safety; and require Boeing to stop cutting corners on safety while enriching management and investors. FAA should call on Congress to pass legislation returning to the pre-2005 certification system where Boeing does not control the process; to increase the FAA budget so it has adequate staff with proper expertise in modern aviation systems.”

Robert A. Clifford, founder and senior partner of Clifford Law Offices in Chicago and an internationally acclaimed aviation attorney who represents the Stumo family, said, “It is clear that Boeing relied on its close relationship with the FAA to make the decision to issue a pilot directive, rather than ground the planes after the Lion Air crash last October. First, the FAA allows Boeing to self-certify the 737 MAX8, then it effectively gave Boeing cover to hide a problem that took these lives in yet another crash four months later in Ethiopia.”