Clifford Law Offices associate, Sarah F. King was named a Top “40 Under Forty” Lawyer this year. She received her award recently in the presence of two colleagues, Brad Cosgrove and Keith Hebeisen at a ceremony that took place in Chicago, Illinois.

The “40 Under Forty” honor is awarded to 40 young attorneys who have achieved success at an early age.

The 40 Under Forty committee at the Chicago Law Bulletin Publishing Company reviewed numerous nominations to select 40 of the most talented young attorneys practicing in Illinois. 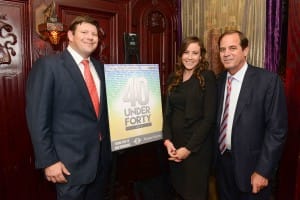 This year, the competition was more fierce than ever. The Chicago Daily Law Bulletin and Chicago Lawyer received more than 1,400 nominations for lawyers throughout the state.

To learn more about Sarah F. King – Read this piece titled “Approach the Bench” on her background and when King decided she wanted to become a lawyer.