Clifford Law Offices has long been a supporter of patients’ rights and is continually dedicated to teaching the importance of knowing one’s rights.

A study was just released by Sorry Works!, a not-for-profit organization based in Edwardsville, Illinois called Don’t Gag Me… A Special Report on Confidentiality Clauses in Med-Mal Settlements that addresses what is going on with confidentiality clauses in settlements, or “gag orders” as many people refer to them. 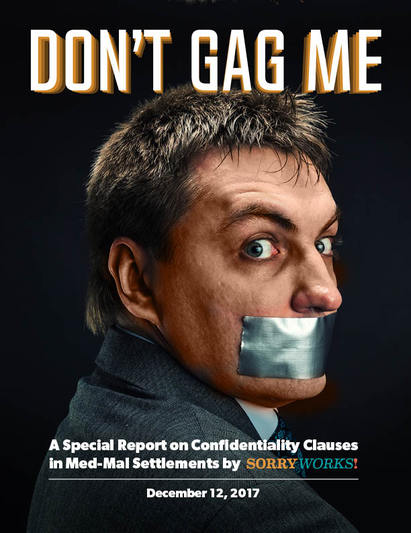 In particular, researchers there interviewed and surveyed stakeholders in the medical malpractice field to learn about the prevalence and impact of confidentiality clauses in settlements after discovering that disclosure and apology are becoming more common. In here, the organization noted that “Unfortunately, gag orders appear to limit sharing and learning from medical errors, especially between healthcare organizations and across the healthcare industry.” The full press release can be read here.

Robert A. Clifford, founder and senior partner at Clifford Law Offices, wrote a column about the issue of the problems involving confidentiality clauses for plaintiffs in a column for the Chicago Lawyer (“Confidentiality Agreements Undermine Justice,” December 2007). There, he wrote, “Confidentiality cannot be allowed to foster this culture of secrecy that can be disproportionately burden those with less sophistication or power, particularly when an inexperienced individual is up against a repeat offender or a self-serving corporate defendant.” Click here to read the article.

He also wrote a column in that publication in December, 2000, (“Yes, Virginia, California Can be Reasonable”) about states that were disallowing apologies for mistakes to be used as evidence of liability in a civil action. California was among them. There, Clifford noted that such laws can be harmful to consumers: “In accepting such moral responsibility, such statements often constitute an admission and it is best left to the courts to decide the statement’s admissibility along with all the other evidence given the factual circumstances of the case.”

He concluded the column by writing, “The civil justice system is meant to redress grievances through compensation that plays a major role in the restorative process of adjudicating actions. Just how far will an “I’m sorry” go in correcting the consequences of a wrongful act committed towards an innocent victim? Such ethics may be important in the healing process of the psychic injury, but it should not be swept under the rug in an adversarial process under the proper circumstances.”