Craig J. Squillace’s favorite fictional lawyer is Rudy Baylor from The Rainmaker, an attorney who represents an elderly couple whose insurance company refuses pay for a surgery that could save their child’s life.

“He is idealistic, sincere and committed,” says Craig. 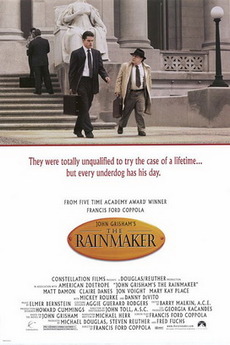 One of Craig’s favorite lines in his closing is when he says:

“I hope that you are astonished…as I am at the lengths to which a wealthy insurance company, like the defendant, will go to take money from a low-income family and then keep it by denying a legitimate claim. It’s no wonder they spend so much money on their lawyers and their lobbyists and their public relations machine to convince us we need tort reform, that we need to put an end to punitive damages. I’m asking you, the jury…just…do what you think is right in your hearts. If you don’t punish Great Benefit…you could be their next victim. That’s it.”

** The Rainmaker photo via Wikipedia