Families of Victims of 737 Boeing Max Plane Crash to Mark Third-Year Anniversary in Protest in Toronto, Canada, and at Boeing HQ in Chicago Thursday March 10th — Zoom Press Conference at 11:30am Central

The families of the victims who were killed in the March 10, 2019 plane crash of a Boeing 737 MAX in Ethiopia gather Thursday, March 10th, 2022 in two countries to try to continue to hold Boeing responsible for the deaths of all 157 on board and to bring attention to a bill recently introduced in the Illinois legislature.

After the in-person Chicago event concludes at 11:30 am CST, a Zoom Press Conference will be held with families from around the world sharing their stories and concerns about the Boeing 737 Max that is currently flying in the skies.  Also on the Zoom press conference will be Illinois Rep. La Shawn K. Ford (D-Chicago), a sponsor of HB 4968 introduced on the Illinois House in January 2022, which calls for punitive damages in wrongful death cases in Illinois. Also attending will be Ed Pierson, former Boeing Senior Manager at the Renton, Washington plant, and now whistleblower and aviation safety advocate.

To attend via Zoom, please register at this link.

Details of the protests that will take place in Toronto, Canada, and in front of the Boeing headquarters in Chicago

WHERE: Boeing Headquarters, 100 North Riverside Plaza, Chicago (in front of office building). Among those who will be holding enlarged photos of the victims is Nadia Milleron, mother of Samya Rose Stumo, 24, whose daughter was killed in the crash.

Another protest will be held across the street from the U.S. Consulate in Toronto, Canada, 360 University Ave. Among the Canadian family members will be Chris Moore, father of Danielle Moore, 24, who was killed in the March 10, 2019 crash of a Boeing MAX jet in Ethiopia. Families, friends, and their supporters there will be carrying various signs including, “We are the Victims’ Voice.”

WHAT: Illinois needs to pass HB 4968, which would hold companies, including Boeing, responsible for punitive damages when they cause people to die. Boeing must be held responsible for the deaths aboard the 737 Max.

Statement of Nadia Milleron:
“Samya Rose Stumo was one of 157 people who died because the Boeing 737 Max 8 they were flying on was an unsafe aircraft and should never have been allowed into service. Their deaths came after the loss of Lion Air Flight 610, another 737 Max that crashed minutes after takeoff, killing all 189 passengers and crew members.

A month after the first crash of a Boeing MAX 737 off the coast of Indonesia in 2018, the mother of the Lion Air pilot, Captain Bhavye Suneja, raised an alarm that no Boeing 737 MAX training was imparted to the pilots, yet Boeing or the Federal Aviation Administration did nothing, and the callousness led to the second crash, despite the sacrifice of Lion aircrew and passengers.

Boeing, headquartered in Chicago, built a defective plane with concealed problems in the 737 Max with the FAA and the corporation deliberately moving forward with a flawed design, all while spending company profits to boost stock prices and executive pay. (See New York Times article by David Gelles, “Flying Blind, The 737 MAX Tragedy and the Fall of Boeing,” Dec. 1, 2021).”

Statement of Chris Moore:
“The family of Danielle Moore does not agree with the Department of Justice’s position regarding their understanding of the Crime Victims’ Rights Act.  The DoJ wishes the representatives of the victims of the Boeing 737 MAX crashes to understand that our loved ones don’t have a say in how their murderers should be dealt with. They have effectively removed the voice of Danielle Moore.

The first objective we want is truth. The DoJ has not shone one photon of new information in the criminal prosecution of Boeing – in fact, they have kept this all secret. They have taken a page from the murderers they have shielded.  They have actually tried to create a new narrative of what happened  – that MCAS “may” have had a cause in the crash. The fact that the DoJ does not know what the truth is should open the door to a greater investigation than relying upon what the blinded agency should have overseen.  The Deferred Prosecution Agreement (DPA) was rushed.  The DoJ has used Boeing’s method of expediency and efficiency to achieve unjust end results.

The DoJ kept families away from the prosecution procedure so that we could not offer information and provide a more objective perspective on the investigation.  The DPA was not based on facts. The flying public deserves to know how the DPA was arrived at — what were the facts used to ‘prosecute’ Boeing?  Who from the Department of Transportation was involved to get an appraisal of Boeing’s compliance of certification of this antiquated aircraft and the company’s duty to protect the public – especially since certification was authorized to them from the Government of the United States of America?” 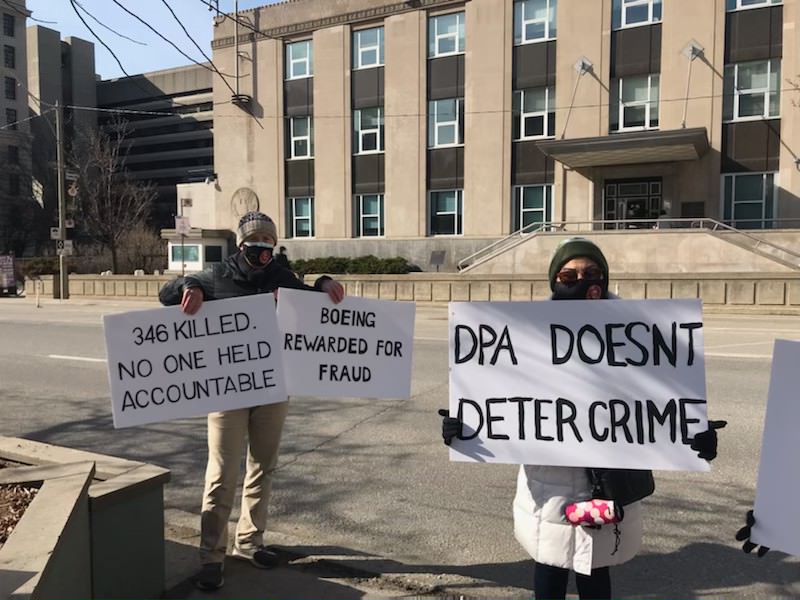 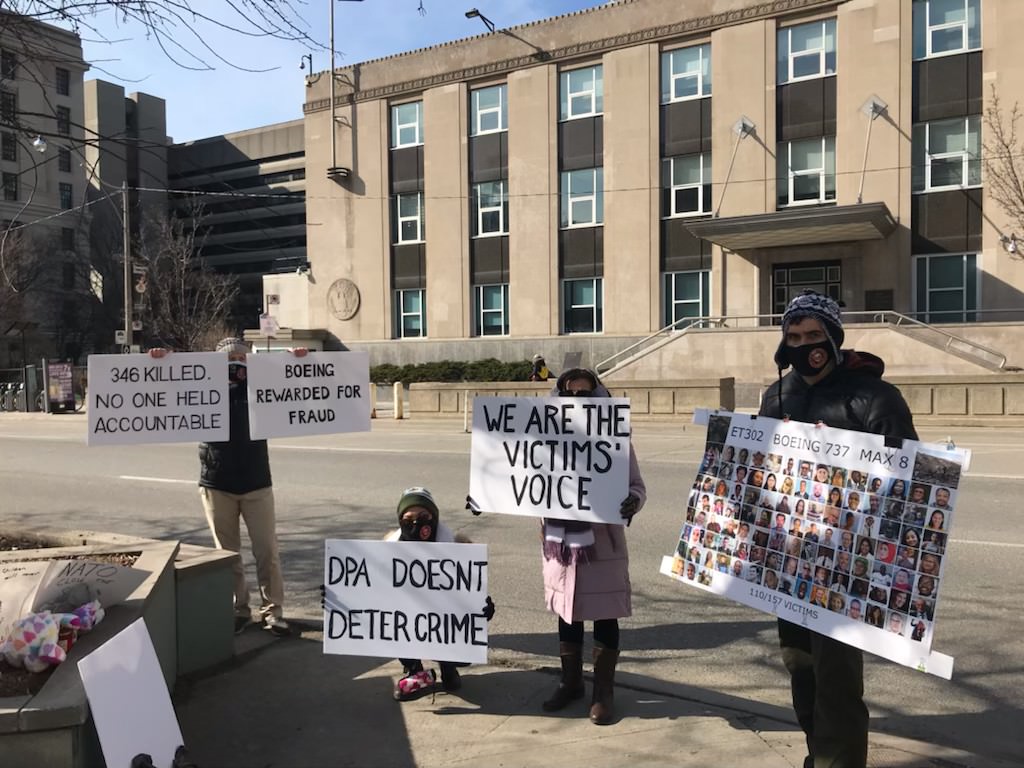 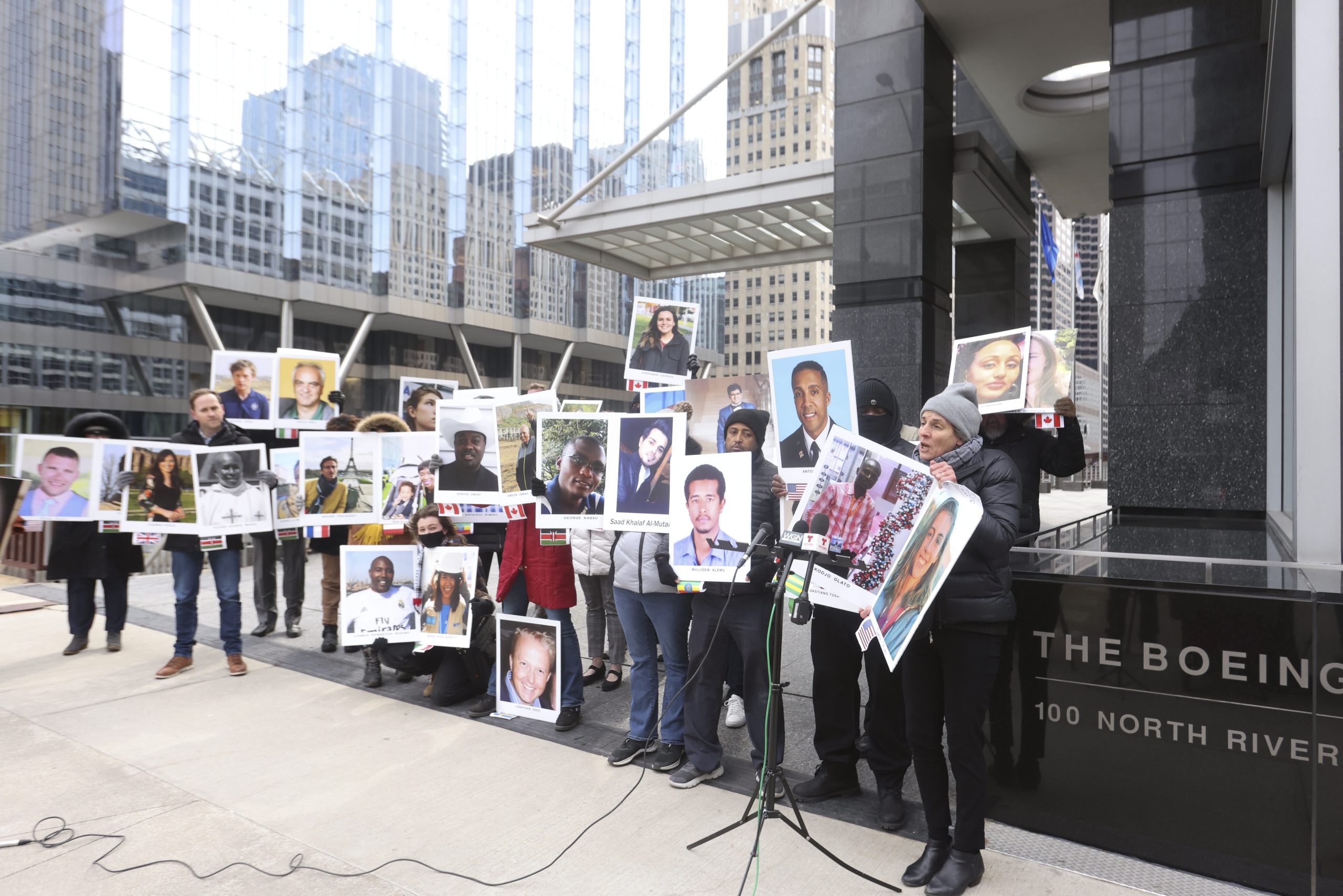 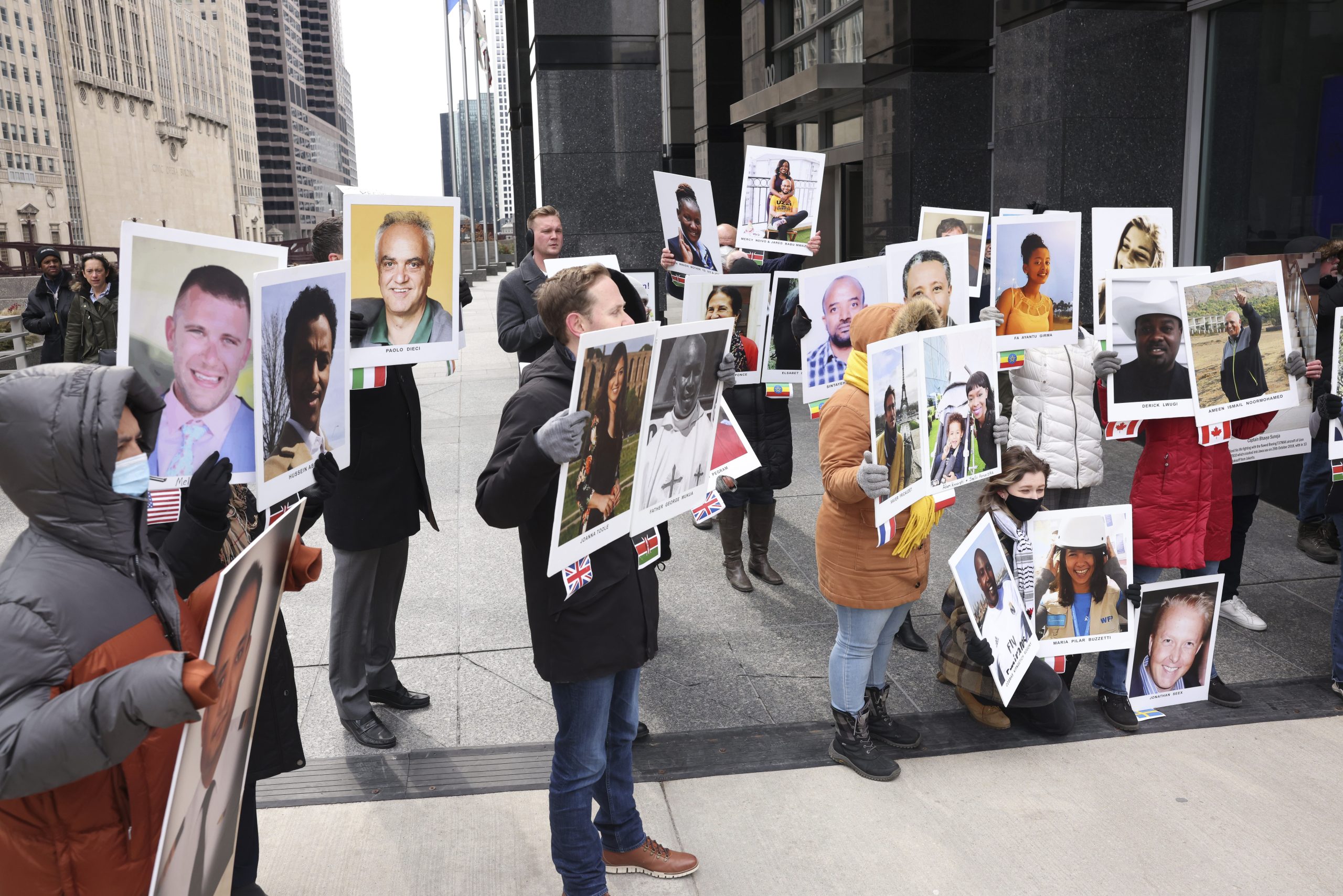