FOR PRESS AND MEDIA: Photos and Video Can Be Accessed Here

Families and friends of those who lost loved ones in the March 10 Boeing 737 Max8 crash in Ethiopia will hold a memorial vigil in front of the U.S. Federal Aviation Administration (FAA) Building at 5 p.m. Wednesday, March 10 marking the two-year anniversary of the crash. They have invited the staff of the FAA and the Department of Transportation (DOT) as well as U.S. House and Senate Aviation Subcommittees and their staff to attend the hour-long vigil. They will hold signs reading, “Fire Dickson, Hire Sully”’ and “346 Dead, No One Held Accountable.”

The Stumo family, whose 24-year-old daughter Samya Rose Stumo, was killed in the crash, will meet the new Administration’s DOT Secretary Pete Buttigieg at 11:30 a.m. EST to inform him of continuing dangers with the Boeing MAX8. The Stumo family will speak to the press following the meeting at 1 p.m. at DOT, 1200 New Jersey Ave., SE, Washington, D.C. 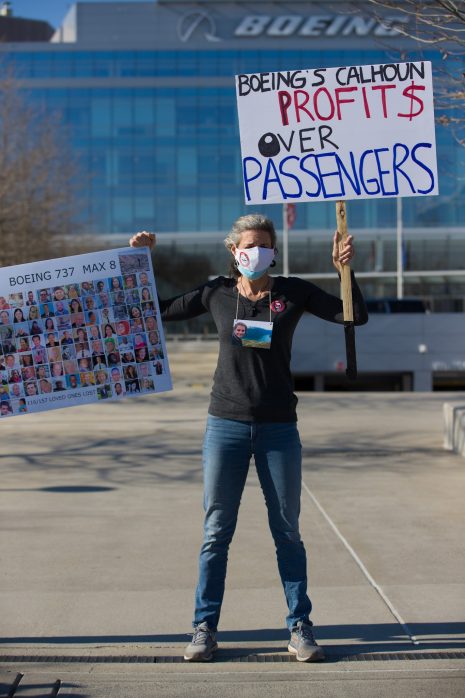 Nadia Milleron, Samya’s mother, and her son, Tor Stumo, stood in front of Boeing’s offices near the Pentagon, 929 Long Bridge Dr., Arlington, Va., at 9 a.m. Wednesday to remind executives of their accountability in the deaths of 346 people. They will hold signs reading, “Profits Over Passengers.”

The luminaria 5 p.m. vigil at the FAA, 800 Independence Ave., SW, will include the names of each of the 157 people who died in the Boeing crash in Ethiopia written on the white-lit containers. Friends and family of the victims will hold photos of passengers who died in that preventable crash and will wear health protection masks reading “Axe the Max.”

Passengers on the plane were from 35 countries. Chris and Clariss Moore of Toronto, Canada, lost their 24-year-old daughter Danielle on the plane. They, along with a group of close friends and family, will commemorate March 10, creating a greater public awareness of the tragedy, by standing in front of the U.S. Consulate in Toronto at 360 University Ave. at 10 a.m. EST. They will hold signs reading, “346 Dead, No One Held Accountable” and “No Transparency, No Justice.” Earlier in the month, the Moores met with Canadian Transport officials to discuss the continuing problems surrounding the MAX that has been ungrounded in Canada. A petition has been created to ban the unsafe Boeing 737 MAX plane in Canada.

Relatives of families of the MAX crash in Ethiopia are calling for Boeing’s Chief Executive Dave Calhoun, his predecessor Dennis Muilenburg and other current and former employees to be deposed under the consolidated lawsuits that have been filed in federal district court in Chicago. Robert A. Clifford, founder and senior partner of Clifford Law Offices and lead counsel of the litigation representing 72 families, reports that a trial date is soon to be set in the matter before U.S. District Court Judge Jorge Alonso in Chicago. In the meantime, discovery continues with millions of pages of documents being reviewed and depositions of many parties being taken, including top Boeing executives.

The Ethiopian government conducted its own investigation into the crash and is expected to release its final report on its cause. A U.S. Senate report was released in December that revealed lapses in aviation safety oversight and failed leadership in the FAA.

Boeing has tried to fix the issue with a patchwork of changes. It recently was reported that a veteran FAA safety engineer, Joe Jacobsen, wrote a letter to the family of Samya Rose Stumo where he stated that leadership failed these families. Jacobsen is expected to retire soon after more than a dozen years at the FAA. 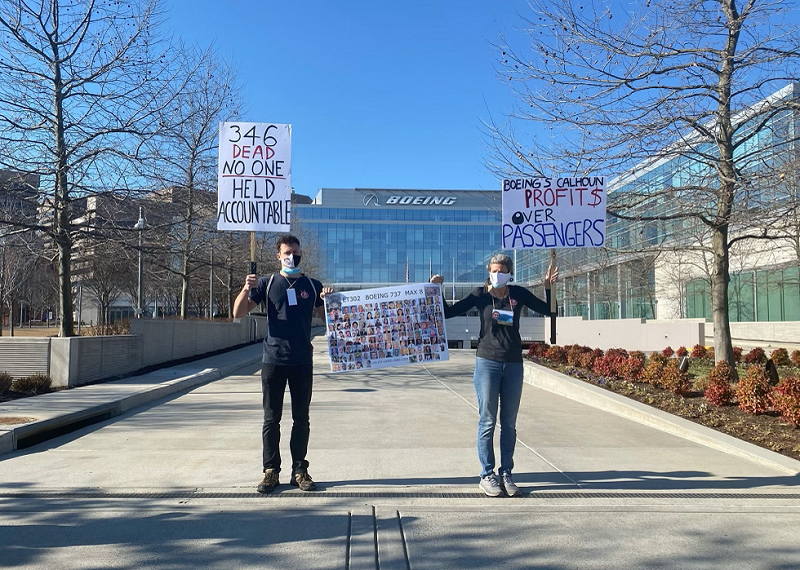 Nadia Milleron (right) and son outside the Boeing offices on March 10, 2021

Families have been insisting on a full recertification, examining all systems of the latest 737 that has not been recertified for more than 50 years and that has undergone numerous changes including placing the newly sized engines further forward on the wings. Internal U.S. FAA documents reportedly show that other Max8 systems fail to comply with modern safety standards.

“The families’ fight for information is really on behalf of the public in an effort to make the flying safer for everyone because it is too late for their loved ones,” Clifford said. “This is one of the most selfless acts I have ever seen in my career as an aviation attorney. They are taking their grief and trying to do something constructive so that their loved ones’ deaths will not be in vain. Although the route they choose is very public, they have put their private suffering aside to try to ensure that this does not happen to anyone else.”

The first Boeing Max8 plane crashed into the Java Sea about nine minutes after taking off from Indonesia on Oct. 29, 2018, killing all 189 on board. The plane was not grounded worldwide until 157 more lives were lost when a second 737 Max8 crashed about six minutes after takeoff from Addis Ababa, Ethiopia, headed for Kenya.