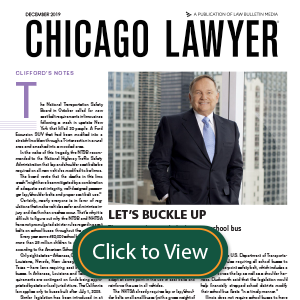 Every year, some 480,000 school buses transport more than 25 million children to and from school, according to the American School Bus Council. Only eight states –Arkansas, California, Florida, Louisiana, Nevada, New Jersey, New York and Texas – have laws requiring seat belts on school buses. From 2007 to 2016, the latest available figures show that 1,282 people died in school transportation-related crashes, according to the NHTSA. Of that total, 118 were on buses. In the article, Clifford addresses that Illinois does not require school buses to have seat belts, although the Chicago Public Schools system requires them. Click here to read the full article.