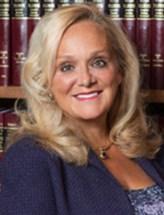 Pamela S. Menaker’s favorite fictional lawyer is Attorney Bryan Bedford (played by Dylan McDermott) from Miracle on 34th Street who defends the existence of Santa Claus in court. Menaker says, “He represents all the good that lawyers do – especially for children.”

Menaker’s favorite part of the film is when Attorney Bryan Bedford says the following in court:

“Your Honor, a lot of people believe in Mr. Kringle. Including millions of children. If you rule against him, you won’t destroy anyone’s belief but you will destroy the man they believe in. Mr. Kringle is not concerned for himself, if he was he wouldn’t be here. He is in this regrettable position because he is willing to sacrifice himself for children. To create in their minds a world far better than the one we’ve made for them. If this is, as Mr. Collins suggests, a masquerade then Mr. Kringle is eager to forfeit his freedom to preserve that masquerade. To subject himself to prosecution to protect the children’s right to believe. If this court finds that Mr. Kringle is not who he says he is, that there is no Santa, I ask the court to judge which is worse: A lie that draws a smile or a truth that draws a tear.”