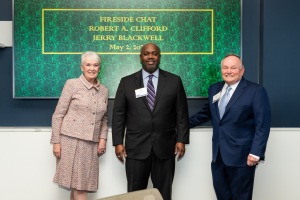 Jerry Blackwell, lead counsel in the litigation against Derek Chauvin in the George Floyd murder case in Minnesota, spoke to a large group of the Chicago Inn of Court Monday, May 2, at Faegre Drinker in downtown Chicago. In a fireside chat led by Robert A. Clifford, founder and senior partner of Clifford Law Offices in Chicago, Blackwell spoke of his advocacy techniques in that high-profile trial that led to the conviction of former police officer Chauvin in the death of Floyd. The event was organized by who recently received the Chicago Inn of Court Joel Flaum Award, Brian Monico of Hale & Monico is President of Chicago Inn of Court. He introduced the program.