Robert A. Clifford Writes Article for Chicago Lawyer About the Role of PAC Donations in the Opioid Crisis 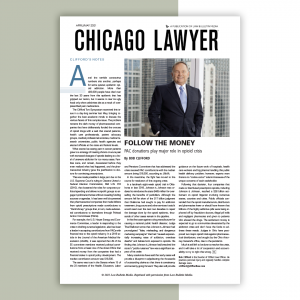 In the article, Bob writes about how addiction to prescribed pain medications, or opioids, has risen dramatically in the past two decades with over 400,000 people across the nation dying from the opioid epidemic.

Last May, the Clifford Tort Symposium brought together the best academic minds to “discuss the various facets of this complex issue” and noted that “Dark Money” groups, who have received contributions from pharmaceutical companies that have made billions from opioid prescriptions, made substantial contributions to lawmakers through Political Action Communities (PACs) due, in large part, to the U.S. Supreme Court’s ruling in Citizens United v. Federal Election Commission, 558 U.S. 310 (2010) which loosened the rules for corporate political spending and allows nonprofit groups to engage in political activities without revealing funding sources or agendas.

Bob expanded on the topic, “The problem remains the dark money of pharmaceutical companies that have deliberately funded the overuse of opioid drugs with a web that snared patients, health care professionals, patient advocacy groups, medical professional societies, medical research universities, public health agencies and elected officials at the state and federal levels.”

The fight against pharmaceutical companies has started in the courts, with a landmark opioid trial in Oklahoma (late 2019) where Johnson & Johnson was ordered to reimburse the state $465 million for overselling the benefits of painkillers. While many cases similar to this will follow suit, Bob comments, “Much is still left to be done to resolve this crisis, and it will take a lot of cooperation and accountability to try to right this wrong.”