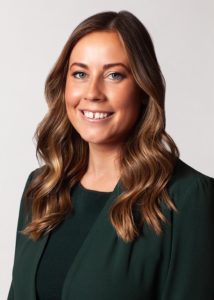 Sarah F. King, partner at Clifford Law Offices, is one of Chicago’s most hard-working, intelligent medical malpractice attorneys. She works tirelessly to investigate and prepare complex medical malpractice cases for the justice of those who have been harmed due to medical negligence.

From a young age, Sarah knew that she wanted to go into the field of law, following in the footsteps of her mother, a paralegal, and throughout the years she has found her passion in the medical malpractice field.

“My mom is a paralegal. She took me to the office and court a lot. I knew I wanted to be a lawyer, although I didn’t know exactly what type of law I wanted to practice. I forced my little sister to play my witness in our reenactments of Law and Order. Even in grade school, I was drawn to fighting for the ‘underdog’ and for women’s opportunities.”
– Sarah F. King

Sarah graduated from DePaul University College of Law summa cum laude as a member of the top 5% of her class and was inducted into the Order of the Coif. She attended undergrad at the Loyola University of Chicago receiving a Bachelor of Arts in English and Women’s Studies. Utilizing her writing skills she has written several articles that have been published in the DePaul Law Review and in highly regarded national publications such as the American Bar Association Litigation Journal. Her exceptional writing has been recognized and she received the CALI Award for Excellence in Trial Advocacy II, Legal Writing III, and Commercial Paper.

While Sarah was a full-time law student, she served as a law clerk to Keith Hebeisen and Susan Capra. Learning from two of the most respected and recognized medical malpractice lawyers in the state taught Sarah what it takes to prepare complicated cases. She has since developed the highest level of skills as a Chicago medical malpractice attorney.

Sarah has a significant amount of trial experience and an impressive success record. She has received $300 million in verdicts and settlements. Some of her successes include a $51 million settlement on behalf of a baby who sustained brain damage at birth and a record $101 million verdict on behalf of a baby boy who was brain-damaged when his external fetal monitoring strips were ignored for six hours.

In addition to Sarah’s success in the courtroom, she is an inspiring advocate for women in law and is an active member of the law community. She is involved in Women Everywhere: Partners in Service Project, has been active in the Women’s Bar Association of Illinois (WBAI), the Illinois Trial Lawyer’s Association and she devotes time to teach a course on Medical Malpractice at DePaul University College of Law.

We are honored to have Sarah King as a partner at Clifford Law Offices; a hard-working, dedicated, and passionate medical malpractice attorney.