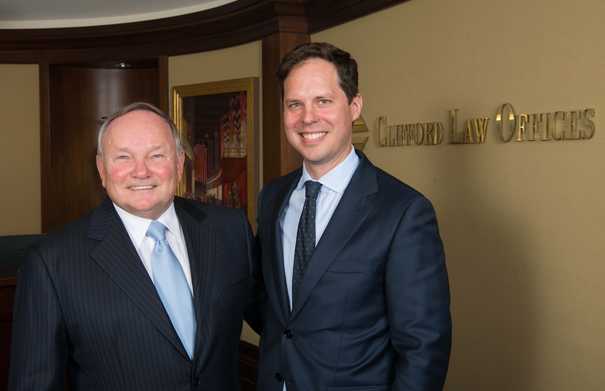 Robert A. Clifford, co-lead counsel on the case, pictured with Kristofer Riddle, associate at the firm, who assisted on the matter.

The Hale litigation arose from the earlier class action lawsuit, Avery v. State Farm. Avery involved a challenge to the quoting or specification of aftermarket non-Original Equipment Manufacturer vehicle repair parts in the 1980s and 1990s. Avery resulted in a jury verdict in 1999, amounting to a $1 billion judgment against State Farm. That judgment was reversed by the Illinois Supreme Court in August 2005. In Hale, the plaintiffs allege that State Farm violated federal law by improperly influencing the Illinois Supreme Court’s decision to reverse the Avery judgment.

Plaintiffs and State Farm have agreed to settle the Hale litigation for $250 million because they believe it is in the best interest of all the parties and to avoid protracted litigation and appeals that could continue for several more years. The settlement provides benefits to the over four million current and former State Farm policyholders who were members of the class in Avery.

As a part of the settlement, Plaintiffs have agreed to dismiss, upon final approval, their RICO claims and unjust enrichment claims. The Settlement Agreement will include recitals that State Farm denies liability, that it considers the claims to be without merit, that it considers that it is settling under the unjust enrichment claim, and that the Settlement is made simply to bring an end to the entire litigation.