The Trial of the Parthenon Marbles 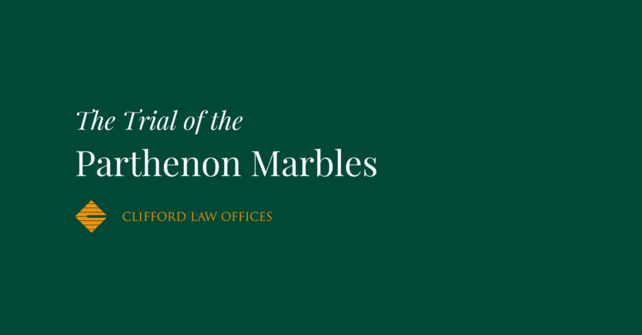 After having tried Socrates, Orestes and Antigone, the National Hellenic Museum (NHM) is thrilled to once again present the powerhouse team of former prosecutors Patrick Fitzgerald and Patrick Collins, with defense attorneys Robert Clifford and Dan Webb, as they take on another case with ancient roots and modern consequences: The Parthenon Marbles. Should they remain at the British Museum or return to their first home at the Parthenon?

On March 16 at the Rubloff Auditorium at the Art Institute of Chicago, the NHM will present a trial unlike any other we have previously offered. Nationally renowned Judges Richard A. Posner, Charles P. Kocoras, and William J. Bauer, will return and will be joined on the bench by Illinois Supreme Court Justice Anne M. Burke and Cook County Circuit Judge Anna H. Demacopoulos. The panel of lawyers will be joined by two more trial attorneys, Sam Adam, Jr., and Tinos Diamantatos, who will examine witnesses presenting the facts behind each side’s case.

The Parthenon Marbles are a collection of Classical Greek sculptures, inscriptions and architectural pieces (originally forming much of the exterior decoration of the Parthenon) that the Ottoman governor of Greece allegedly permitted Lord Elgin to ship to England in the early 1800s. They have been on display at the British Museum for nearly 200 years. Since obtaining independence from the Ottoman Empire, Greece has pressed the United Kingdom for the Marbles’ return, a request that has been refused on the grounds that ownership was properly acquired.

The Trial Series has become a signature event for the National Hellenic Museum. Previous Trials attracted more than 800 participants, and The Trial of the Parthenon Marbles is creating the same excitement. This event not only advances the mission of NHM, it casts a positive light on all our participants: Lawyers exercise their skills in an enjoyable and intellectually rigorous setting; judges hand down thoughtful opinions tying the issues raised in ancient times to contemporary concerns; and our sponsors enjoy being associated with a unique and prestigious event.

Valet parking is available starting at 5:30 p.m. at the entrance on Columbus Drive for $16 or you can self-park in any of the Millennium Park garages.