Clifford Law Offices held a press conference on Wednesday, Nov. 3, 2021 after filing a lawsuit on behalf of a 24-year-old south suburban Worth resident who was negligently discharged from Silver Cross Hospital. Thereafter, the man, who had plans to enroll at the University of Illinois (Chicago), was dropped off in a dark, parking lot on a cold December evening about midnight. The two New Lenox police officers who did so are alleged to have done so with utter indifference and conscious disregard for his safety. The man, Qusai Alkafaween, was clearly still suffering from a mental illness yet was inhumanely dropped off miles from his car in another town with no coat and no cell phone.

Body camera footage of the officers obtained by Clifford Law Offices clearly indicates that the two officers acted recklessly and with a wanton disregard for a helpless man who was taken to Silver Cross Hospital in New Lenox last Dec. 5 for psychiatric issues. Instead of admitting him, medical personnel prematurely discharged him after three hours at the hospital, whereupon New Lenox police drove the helpless 24-year-old to an empty, dark, desolate parking lot at Wolf Road and Route 6 in Orland Park. Police can be heard saying on bodycam footage that he hopes the patient doesn’t “ping pong” back to the hospital. The man obviously remained disoriented and asked police for help, but the police instructed him to start walking down the dark, busy street. Alkafaween then wandered into traffic and was struck by a driver who did not see him on the dark road. He suffered permanent brain damage.

After spending weeks at Silver Cross Hospital, Alkafaween began a long course of traumatic brain injury rehabilitation treatment from which he still suffers with no ability to ever attend college. He was released into the care of his mother who flew from Jordan on an emergency visa where she now continues to care for him round the clock. His mother’s statement is below.

The young Alkafaween suffered from psychiatric issues and was on medication at the time of the incident. Hospital personnel as well as the police did not follow proper protocol and established guidelines in handling a person suffering from a mental health or emotional crisis, according to the complaint that was filed Oct. 13 in Will County Circuit Court.

New Lenox Police Department policies and procedures hold that a person in crisis or one who is suffering from mental illness requires officers to place the person into custody and safely transport him/her to an approved mental health facility where an officer has reasonable grounds to believe the person needs immediate hospitalization to protect himself (405 ILCS 5/1-100). Officers here clearly violated those policies and procedures, as described in the complaint. 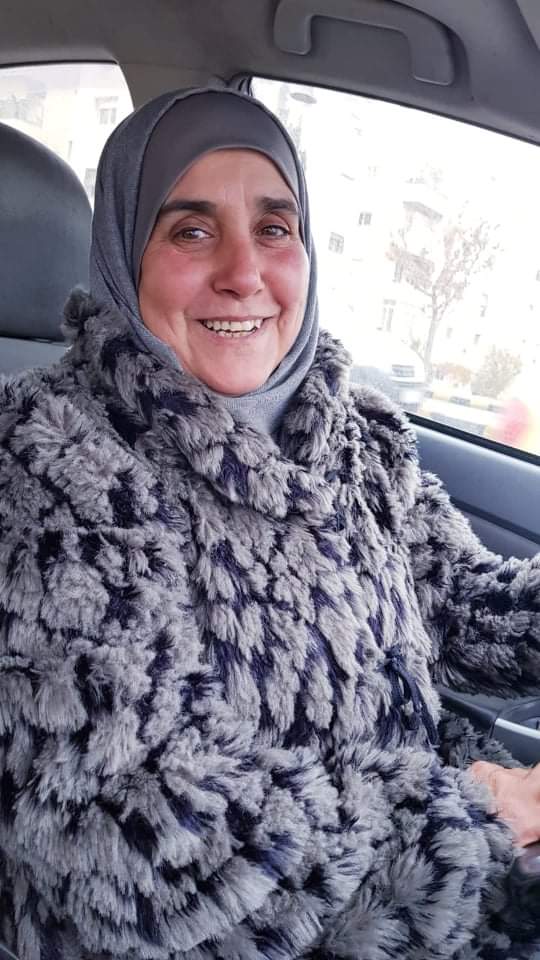 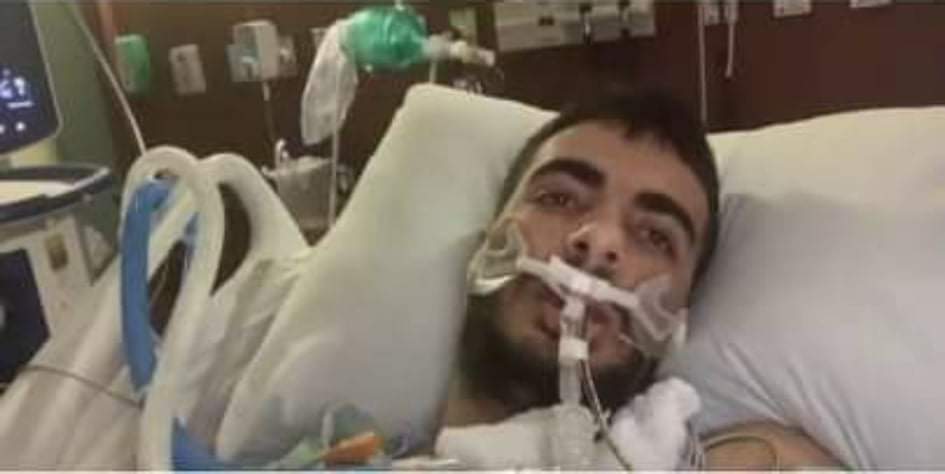 Statement of Ikhlas Alraqad, Qusai Alkafaween’s Mother
MY NAME IS IKHLAS ALRAQAD AND I AM THE MOTHER OF QUSAI ALKAFAWEEN. WORDS CANNOT EXPRESS MY GRIEF AND DISAPPOINTMENT IN THE WAY THAT MY DEAR YOUNGEST SON WAS TREATED AT THE HANDS OF SO MANY PEOPLE WHO ARE SUPPOSED TO TAKE CARE OF HIM.

HE CAME TO AMERICA FROM JORDAN TO ATTEND COLLEGE WITH HOPES OF BECOMING A BETTER PERSON, SOMEONE WHO COULD DO WONDERFUL THINGS IN A BIGGER WORLD THAT OPENED UP TO HIM. HE HAD SO MUCH HOPE AND PROMISE. INSTEAD, EVERYTHING IS NOW SHUT OFF FOR HIM. ANY HOPE FOR HIM OF DOING GREAT THINGS HAS ENDED WITH THE INHUMANE TREATMENT AT THE HANDS OF THOSE WHO JUST DIDN’T CARE WHAT HAPPENED TO HIM.

WE HAVE COME TO OUR LAWYERS, ATTORNEY MOHAMMAD OWAYNAT AND CLIFFORD LAW OFFICES TO SEEK JUSTICE. ALTHOUGH THE LEGAL SYSTEM CANNOT GIVE ME BACK MY SON THE WAY HE ONCE WAS, IT IS IMPORTANT FOR THOSE WHO ARE RESPONSIBLE BE HELD ACCOUNTABLE FOR THEIR RECKLESS CONDUCT THAT FOREVER CHANGED THE LIFE OF QUSAI AND OF OUR ENTIRE FAMILY. THANK YOU. 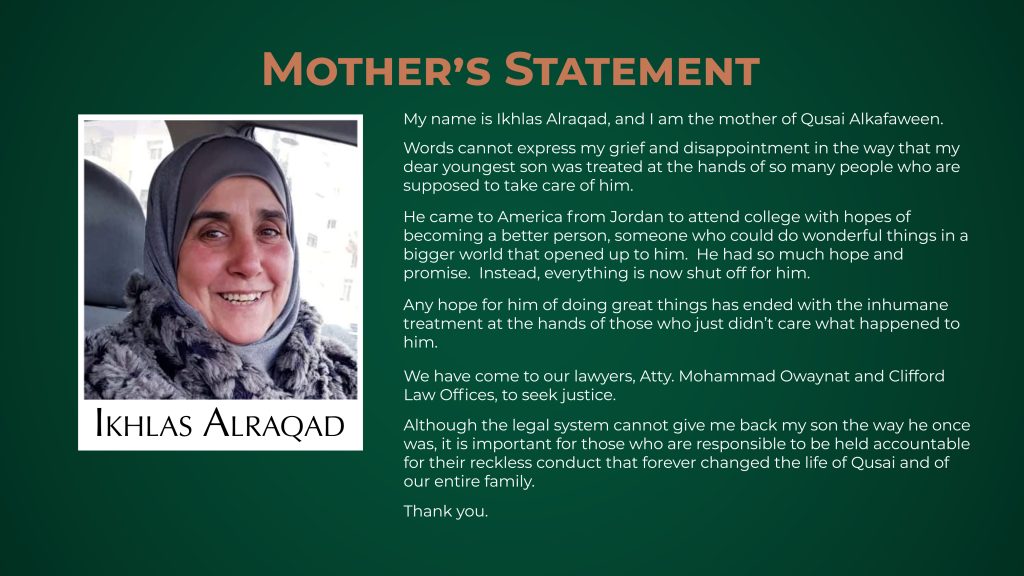