Why Rideshare Companies Need to Rethink Their Approach to Customer Safety

Uber is an undeniably hot name right now, with the company having just released its long-anticipated IPO prospectus. But those soaring revenue and user-base numbers released with the filing leave out one crucial element of the rideshare business: As one of the top ridesharing companies in the world, Uber has a great responsibility to its customers and their well-being, and ignoring that responsibility can have tragic consequences. 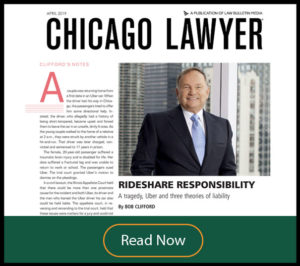 Bob Clifford of Clifford Law Offices reminded us of that important fact this month in an article for Chicago Lawyer.

In the article, Clifford outlines the story of an Uber driver who, after his passengers tried to offer directional help, “became upset and forced them to leave the car in an unsafe, dimly lit area.” En route out of the area, the couple was struck in a hit-and-run accident that left one with a fractured leg and the other with a traumatic brain injury that will, according to the article, leave her “disabled for life.”

Trial court initially granted Uber’s motion to dismiss the case, but the plaintiffs — that is, the couple hit in the accident — have since appealed that decision, alleging that the driver did not have the necessary chauffeur’s license Uber requires. Also mentioned was the fact that Uber itself failed to conduct a background check on the driver who, according to the article, “allegedly had a history of being short-tempered.”

The global rideshare market is expected to reach $148.7 billion by 2024. As companies like Uber, Lyft, and others amass more and more customers, they should be taking more steps to ensure those customers are with safe, competent drivers when they book a ride. When tragic events such as the one Clifford discusses happen, rideshare companies need to step up and assume more responsibility, rather than simply dismissing the issue.

You can read Clifford’s full article on the responsibility of ridesharing companies here.