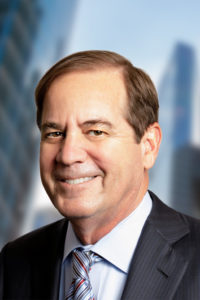 Keith A. Hebeisen, partner of Clifford Law Offices, will be receiving the Leonard M. Ring Lifetime Achievement Award at the 49th Annual Convention of the Illinois Trial Lawyers Association (ITLA).

A select ITLA committee selects a lawyer each year who has demonstrated “a substantial part of their life and their practice to ITLA, someone who has done more than is called for” in the name of Ring, a prominent trial attorney in Illinois until 1994 when he passed away.

Hebeisen has been a member of ITLA since his induction as a lawyer in 1983 and served as ITLA President in 2005-06. He has served on the ITLA Executive Committee for decades. He has received ITLA Amicus Volunteer Award and since 1992 has served as Editor of its Medical Malpractice Notebook, a popular and thorough guide for trial lawyers across the state.

Hebeisen also serves on the Board of Governors of the American Association of Justice (AAJ). He is a Fellow in the International Academy of Trial Lawyers and the American College of Trial Lawyers. He has been recognized by U.S. News-Best Lawyers as a top tier attorney in the areas of medical malpractice and personal injury law. Hebeisen was recognized for achieving a record verdict of more than $100 million in a birth injury medical malpractice case in 2019, one of the top 100 verdicts in the country and one of the top 10 verdicts in Illinois.

Hebeisen will receive the award following the installation of Patrick A. Salvi II as ITLA President at the ITLA President’s Reception and Installation Dinner that will be held at 6 p.m. Friday, June 17, at the Sheraton Grand Chicago, 301 East N. Water St.

To register go to www.iltla.org or call 800-252-8501. Registration includes attendance at the after party at the Fountainview Room at the Sheraton.