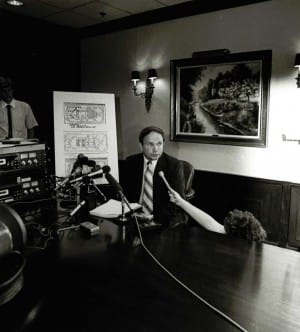 Robert Clifford is no stranger to the media. Here he is pictured in 1987 facing the press following the filing of a legal action on behalf of Nancy Clay, a 31-year-old woman who died of smoke inhalation in a Chicago high-rise when firefighters were unable to reach her, despite her many calls for help. As Bob Clifford put it, “It is one of those rare cases that [raise] the public’s consciousness about two primary issues: the operation of the 911 system and the adequacy and effectiveness of the city’s response to a high-rise fire.” The case led to significant changes in Chicago’s emergency response system, which may have saved lives over the years.